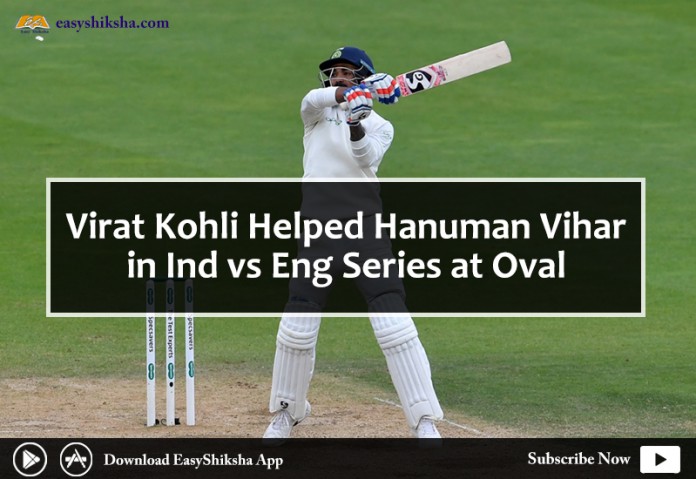 Hanuman Vihar made his debut in the last match of the India vs England Test Series that we are already loosing that time by 3-1. Virat showed his faith in new member of our cricket team. A fresh mind was about to face all set James Anderson and Stuart Broad. As per Hanuman Vihar, Virat’s words helped him in tackling two set bowlers that day.

“I had a wonderful experience getting my Test cap from Virat Kohli. I knew I had to focus on the bigger picture — which was the match at that point — and not get overawed by the moment. That is why I kept my emotions in check as I took my Test cap,” Hanuma told Firstpost after landing in India from England.

It was coach Ravi Shastri who told Hanuma about his debut a few days prior to the fifth Test and while the most memorable moment of his cricketing career has just gone by, making it to the national team was in no way easy for the 24-year-old from Andhra Pradesh.

Hanuma Vihari told in a interview given to a website that Virat Kohli helped a lot in his first good show. Vihari said, ‘It was a big laugh for me. Playing in front of bowlers like Anderson and Broad was like going for me in a different world. Playing in front of the bowlers I grew up watching on TV, was tense for me. ‘ However, Vihari said, “Kohli helped me a lot on the other end. They gave me some tips. He also said that this is the most difficult situation for batting in your international career. If you take Anderson and Broad here, it will be a wonderful experience for your career that is also the first Test innings.

Currently Hanuma Vihari is fighting severe jet lag and can barely remember the last 48 hours. “It was a blur to be honest… I really don’t remember doing anything much apart from sleeping,” he gushes. The 24-year-old middle-order batsman, however, remembers vividly the heady fortnight that preceded this niggling hangover, right from the moment he was included in the Indian team for the final Test at The Oval, to those dreamy five days when he made his first confident strides as an international cricketer. This England trip was short, but “deeply satisfying.” “Making your Test debut at The Oval against the likes of Anderson and Broad is something everyone aspires for,” he says.