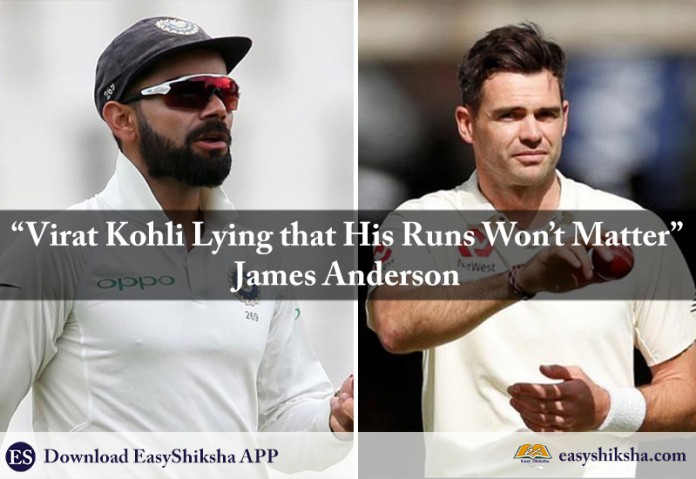 In a recent event James Anderson was asked about Virat Kohli’s previous statement. Virat recently said that his run doesn’t matter, whether he get out or not. When asked to James he said that he is lying if he says that. He is one of world’s best player and if he says that his form doesn’t matter then he is lying. Of course it do matter, he also want to mark himself and now as a captain, expectation are high.

Kohli had struggled in England in 2014 and managed only 134 runs in five Tests, one of his worst Test performances. At the beginning of the ongoing tour, Kohli had laughed off queries about his form, stating that he intends to enjoy his time here rather than obsess over his individual form as long as the team does well. Anderson, 35, has an outstanding record against Kohli, having dismissed him four times in six innings during the 2014 tour. Overall, in Tests, Anderson has dismissed Kohli five times going back to 2012.

Kohli, the Indian mainstay, had a forgettable Test tour of England in 2014, where he amassed just 134 runs over five Tests. However, he showed his class and quality by accumulating 655 runs in five Tests against England in the home series (2016-17) to lead his side to a 4-0 thumping win. On the other hand, the 35-year-old veteran swing bowler has accounted for Kohli’s scalp on five occasions in Tests, which includes the four times he dismissed the fulcrum of the Indian line-up in the 2014 Test series.