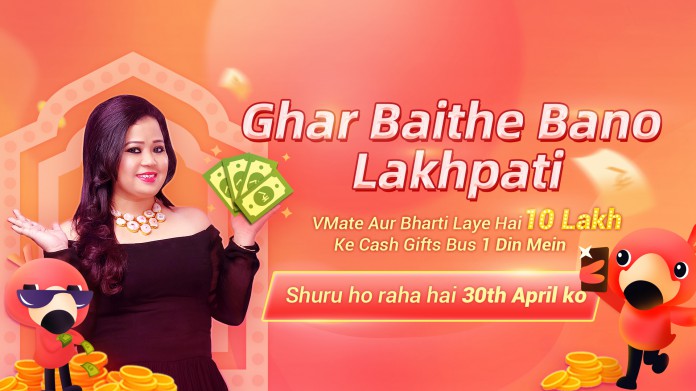 Trending short video app VMate’s has come up with a unique opportunity for its users to earn money by creating videos on the app even as they continue to stay at home due to the lockdown triggered by Covid-19 pandemic. Through the campaign, VMate’s is providing monetary help especially to users who are unable to go for work, resulting in loss of their incomes. Adding the fun factor is popular television personality and stand-up comedian Bharti Singh, who has joined the campaign to provide wholesome entertainment to the app users. The campaign, titled #GharBaitheBanoLakhpati, offers VMate users an opportunity to earn cash rewards up to Rs 3 crore by creating videos.

As part of the campaign, VMate has launched a dedicated H5 in-app page wherein details of the drive are furnished and creators have been invited to share their videos and earn money. Users can join the campaign starting April 28. With Bharti coming on board, she is slated to add more fun and also benefits for VMate creators as part of the campaign. She will act as a judge to evaluate the videos and send out Rs 40 lakh over a period of four days as reward to select creators from April 30 to May 3. Each user has the opportunity to earn as much as Rs 5 lakh through the campaign, which is expected to be a laugh riot full of fun and frolic.

The star comedian has also launched her own profile on the short video app to reach out to millions of Indians who have made VMate one of the most downloaded social media apps globally.

Speaking about the campaign, VMate Associate Director Nisha Pokhriyal said, “VMate has made consistent efforts to keep its users informed as well as entertained during the ongoing lockdown phase. Taking it a notch further, we have roped in Bharti Singh, who is a popular name in the Indian entertainment industry. I am sure our users will make the best use of this opportunity.”

Bharti too asserted that she was looking forward to the campaign, saying, “I am excited to reach out to millions of VMate users through this campaign. It is a unique opportunity to entertain as well VMate’s as reward my fans through the short video app.”

Since the outbreak of the pandemic, VMate has taken a number of steps to raise awareness about Covid-19 as well as help people who are stuck in homes during lockdown. The app recently launched a profile ‘Myth Buster’, which provided WHO-sourced information in interactive and animated format. Besides, doctors were also roped in to bust myths concerning the novel virus. Apart from this, a #21DaysChallenge was also launched wherein users were asked to up a fresh challenge each day and remain busy at their homes. It was also an opportunity to win cash rewards.

This isn’t the first time that VMate has joined hands with celebrities to organize campaigns that charm as well as benefit its users. Earlier in 2020, VMate collaborated with India’s top YouTubers Bhuvan Bam, Ashish Chanchlani and dancing sensation Sapna Choudhary for #VMateAsliHolibaaz campaign. A short movie and a foot-tapping Holi song were released as part of the campaign, which also resulted in several users winning prizes such as smartphones, television sets, etc. Prior to that, VMate had launched a New Year campaign titled #SunnyKaNewYearCall with Bollywood diva Sunny Leone, as part of which she even went on a date with the winner of the campaign.

For more information related to technology, visit: HawksCode and EasyShiksha.