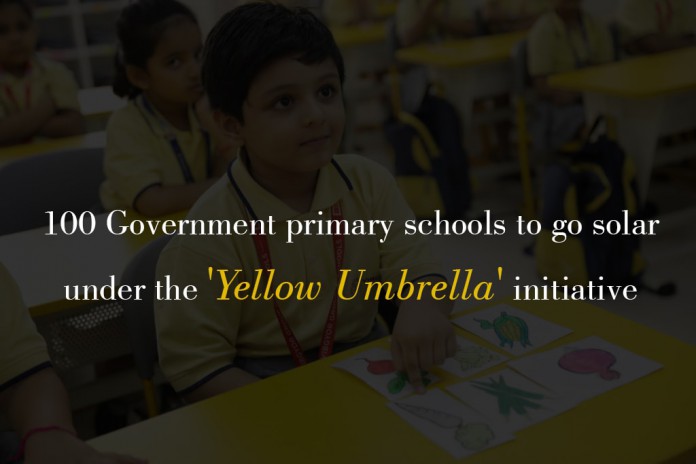 Gurugram: Raipur Government Primary School is the only school in Raipur village of Mewat. Being the only primary school in the village, it is expected to bring about a paradigm shift in literacy levels. Yet many basic amenities elude the school. Come summers and power outages become common. Students have to brave the scorching heat amidst the lessons and it becomes increasingly difficult to sit and study in the classrooms.

Eastman Auto and Power Limited (EAPL), one of India’s leading companies in energy storage and solar solutions, has found a noble way of redressing the power woes of the school by harnessing sunshine. Government Primary School will be one of the schools among 100 others in India that will be solarized as soon as the part of the company’s‘Yellow Umbrella Campaign’.

This CSR initiative apart from taking the schools solar and providing them uninterrupted electricity also aims to sensitize students about the need for sustainable development and judicious use of green resources. The project is aligned with the broader vision to contribute to National Solar Mission by moving a step forward towards encouraging the use of renewable energy through solarizing schools.

As a part of this initiative, a full solar structure consisting of solar panels, PCU and Batteries will be installed by EAPL at the school completely free of cost. A total of 15,000 students are expected to be sensitized about the benefits of solar energy through this project. Beginning from Mewat, Haryana, the campaign will target states such as Rajasthan, UP, Gujarat, Maharashtra, Karnataka, Kerala &Madhya Pradesh.

“CSR forms the core philosophy of Eastman Auto and Power Limited. This is a real impact that we want to create and give back to the community. Solar energy is the future of India’s energy roadmap. The initiative will provide schools with a sustainable and cost-effective solution for resolving electricity woes. It will also go a long way in not only improving the student turnout but also sensitize children to embrace solar energy,” said Mr. Saurabh Srivastava, President-Marketing and Product Strategy, Eastman Auto and Power Limited.

The campaign will be implemented in association with a non-governmental organization, United Ways who will help Eastman in finding the right set of schools in these states. These schools need to be in remote areas with either very little or no grid power, wherein solar energy will ensure normal functioning of the school and a healthy student turnout.

Going solar entails numerous benefits. Solar energy is not only cost-effective but is eco-friendly and has a potential to reduce India’s carbon footprint. To promote the nationwide adoption of solar energy, the Indian government launched National Solar Mission in 2010 which aims to achieve 100 GW of solar energy by 2022. According to the November 2017 report of Bloomberg New Energy Finance (BNEF), around 715 MW of capacity was added across the country in the last fiscal as compared to 227 MW in the previous year, taking the country’s total installed capacity to 1.3 gigawatts.

About Eastman Auto and Power Limited

Eastman Auto & Power Limited is acknowledged globally for its innovative approach, quality, and excellent services. Established in 2002, EAPL is the leading manufacturer, supplier and exporter of all kinds of energy storage and solar solutions with manufacturing and research units in India. The range of products offered by Eastman is known for its quality, durability and performance. The company provides batteries for vehicles, Inverters &UPS systems applications as well as E-rickshaw and solar solutions. EAPL also provides the most comprehensive portfolio of customized packages, solutions and services along the solar PV product line for SOHO, Rooftop, Residential and CSR applications.  The company support and maintenance services across the world help to ensure efficient solar and energy storage installations.