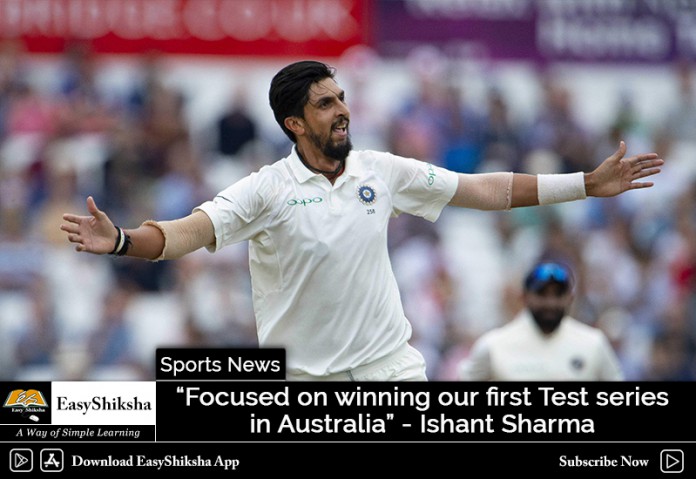 Bracing up for the “biggest opportunity” to acquire a maiden Test series Down Under, India’s Ishant Sharma also cautioned that Australia is good enough to cause difficulties, irrespective of the turmoil in its cricket.

The Border-Gavaskar Trophy begins in Adelaide on December 6, with the Indian team bedding in for training in the Sydney Cricket Ground and taking on Cricket Australia XI in a four-day excursion match from Wednesday.

“We don’t really consider all these things. It depends on a specified day. Until the time we receive the results we don’t take anything lightly.

“We’re fairly inspired. The aim right now is to win the show and that is what everyone is focussing on. We don’t even think of private performances, just 1 goal, to win a series in Australia,” said Sharma on Tuesday.

“If you are representing the nation the pressure is there, I think that it’s a fantastic chance as well because you’ve got a wholesome competition in the group as you can see there a lot of fast bowlers coming up and if you are not doing well then, any moment, you’ll be able to sit and watch the game. I think it’s a great opportunity for everyone to do well in almost any conditions as you can see, we did well in the previous two tours especially in South Africa and England too”

The gangly Indian pacer also highlighted that the focus would for now be on making the”most from this clinic game” and not fuss too much over the mixtures of the side. “Combinations depend on particular wickets and conditions, it’s very early to talk about mixes. Right now, we’re thinking how we can make the most from this practice game. Not thinking too much beforehand about what combinations and conditions we are going to perform in the Test matches,” he explained.

India is yet to win a Test series in Australia, but Ishant weens that’s a thing of the past. “I am not actually a kind of person who thinks about the past, I am always looking ahead to what is gonna occur later on. So, I am looking forward to doing well in this tour”

The last time India played Australia in a Test series, Ishant Sharma needed a small banter with the then Australian skipper Steven Smith, together with all the Indian pacer’s facial expression moving viral across social media to add the normal competitive flavor both these sides discuss. When asked if the chance of replicating something like Ishant delivered a nail yorker-of-a-response: “Very hard to say right now, I do not know what is going happen. Perhaps once the series starts, we will have to know what faces we need to make.”