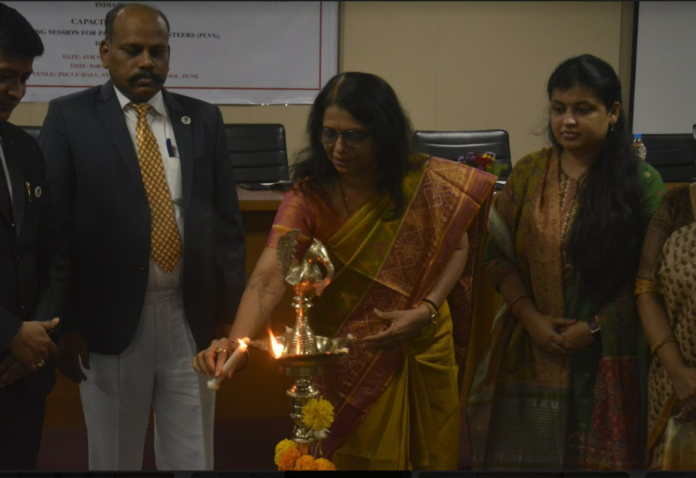 Pune, 12th May 2022: Symbiosis Law School, Pune, a constituent of Symbiosis International (Deemed University) organized the inaugural ceremony of the Pro Bono Club of SLS-P as part of the Nyaya Bandhu Scheme, Department of Justice, Government of India on 4th May 2022 from 9:00 AM to 3:00 PM at the PDCLE Hall. Subsequent to the Inauguration, a training session and capacity building for Para-legal volunteers (PLVs), DLSA, Pune was held. The Club aims to create legal awareness literacy among the marginalised members of the society in collaborations with NGOs, conducting legal aid camps/clinics, providing legal consultancy and legal aid services to beneficiaries, and assisting Pro Bono Advocates registered under the Nyaya Bandhu platform among several other activities.

The session began with a ceremonial lighting of the lamp by the faculty and esteemed dignitaries. Dr. Shashikala Gurpur, Director, SLS-P, Dean Faculty of Law, SI(DU), Fulbright Scholar and Jean Monnet Chair Professor (EUC-LAMP co-funded by EU) applauded the efforts of Adv. Sangramjeet Chavan, Mr. Pratap Sawant and Adv. Deshmukh helped bring this event to fruition. Mentioning that “Injustice would leave a bleeding wound to humanity,”.  Dr. Gurpur elucidated that Symbiosis Law School, Pune will be the first private law school from the State of Maharashtra and the only one in Pune to have been nominated among 29 law schools to house the Pro Bono Club under the Nyaya Bandhu Scheme of Department of Justice, Govt. of India.

After the felicitation of the dignitaries, Ms. Mahima Khera, Program Consultant, Representative of Ministry of Law and Justice, Government of India provided an ‘Overview of Designing Innovative Solutions for Holistic Approach to Access to Justice (DISHA)’ as well as their work in the past few years. She extensively discussed the DISHA scheme and particularly focussed on the four primary verticals i.e., Tele- Law, NYAYA BANDHU, NYAYA MITRA, Legal Literacy and Legal Awareness Programmes. Dr. Shirish Kulkarni, Assistant Professor, Symbiosis Law School, Pune, elaborated the objectives of the Community and Legal Care Centre, a constituent of Symbiosis Law School, Pune. Ms. Asha Singh, Convenor, Symbiosis Law School, Pune further highlighted the achievements of the Community Legal Care and Literacy Cell in the past academic years. Various aspects from the establishment of a legal aid clinic at Sus Gaon and Yerawada Central Prison, Pune to the E-SHRAM card and the Barefoot Lawyering Programme in association with Ashta No Kai- For a better tomorrow were discussed.

Mr. Sanjay Deshmukh, Chief Guest, Principal District Judge, Pune Chairman, District Legal Services Authority Pune in his inaugural address shared his insights about the world of jurisprudence, and the need to be informed, knowledgeable and confident in the present world. He further guided the students in mastering and tackling issues in their early years, and motivated them to remember the importance of being a lawyer.

After the Inaugural Ceremony successfully ended, the Capacity Building Training Session for 160 Para-Legal Volunteers (PLVs) commenced. At the outset, Mr. Pratap Sawant, Secretary, Pune District Legal Services Authority provided a brief overview of the purpose of PLVs. A video was presented on the Nyaya Bandhu App on behalf of the Department of Justice.  In the first session, Advocate Rhishikesh Ganu, Senior Advocate with District and Session Court, Pune deliberated on the PLV Scheme of NALSA. He also shared the objectives of the scheme and expectations from a PLV.

Advocate Yashpal Purohit, Empaneled Advocate with District Legal Service Authority, Pune conducted a second session on Overall Structure of Para Legal Work where he opined on the importance of PLV assistance to lawyers, jail inmates, police, and other authorities and a brief insight into the kind of work that will be delegated to PLVs. He further elucidated on the role played by volunteers in looking into the plight of the ailing parents of inmates and the education of their children. He urged students to work towards charity and the welfare of the children and their education. Sessions 1 and 2 concluded with the Question & Answer sessions with enthusiastic participation from the student fraternity.