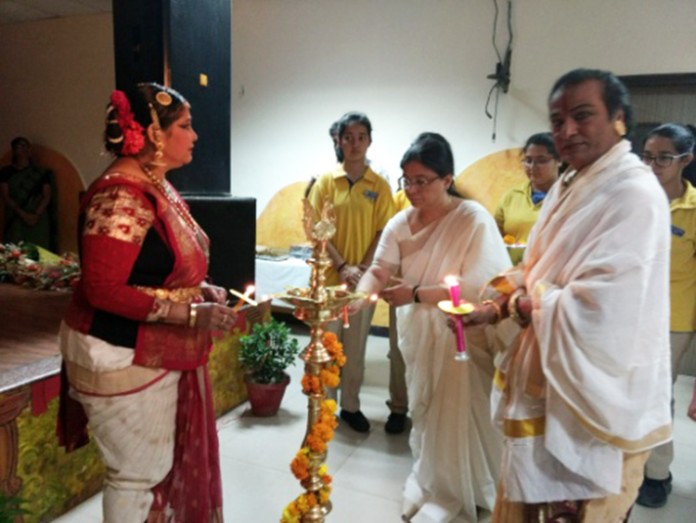 A Kuchipudi Dance Recital by Padmashree Guru Jayarama Rao and his wife Smt. Vanashree Rao under the aegis of SPIC MACAY was presented on 26th April, 2018 at Billabong High International School, Noida. They were accompanied by Sh. Venkatesharvam for vocals, Sh. R. Keshavan on Mridangam and Sh. V. S. K Anna Durai on violin.

The artists were accorded a traditional welcome and the programme commenced with lighting of the ceremonial lamp.

The program witnessed a mesmerizing rendition by Pandit Jasraj Ji through a video streaming. Pandit Jasraj ji was one of the greatest maestros of classical music. His musical career spanned 75 years resulting in national and international fame, respect and numerous major awards and accolades. Rattan Mohan ji threw more light on the life of Pandit Jasraj Ji as Pandit Ratan Mohan ji is both the nephew and a disciple of Pandit Jasraj Ji. It was a truly enlightening for the Billabong learners as they gained information about his life that possesses galore of achievements and motivational moments through an interaction with Rattan Mohan Sharma Ji who is an Indian classical vocalist, belonging to the Mewati gharana.

The artists emphasized on the essence of good, evil and discipline as an important part of our lives through stories of Narsimha and Krishna.

The audience was mesmerized with their footwork, facial expressions and homogeneity in presentation of this vibrant dance form.